T-shirts or “tees” as often referred to by modern standards have become a basic wear for most people. In fact, it is so popular that where ever you may go you can’t miss seeing someone wearing this type of apparel for fashion or function.

And while a lot of us knew some things about t-shirts, there are still some facts about this unassuming everyday wear that will leave us surprised.

So allow us to share this information as we are going to tackle the 7 most amazing and interesting facts about graphic t-shirts in today’s article.

The Origin Of The Term

The word “t-shirt” was coined by an author named F. Scott Fitzgerald in his book entitled “This Side Of Paradise”, a novel which he wrote in 1920. The term wasn’t that popular back then as t-shirts were once labeled as “jimshirts” or “skivvies”, but people learned to embrace it many years later.

Long before graphic t-shirts were invented, textile printing was already practiced in China in the third century. The method of printing was done using a block of wood with carved designs which were then dipped into a vat of ink and then pressed down to a fabric such as brocade, satin, and silk.

The Most Common T-Shirt Fabric Is Stronger Than You Think

Today, cotton is considered as the most common fabric used for making t-shirts. And while it is often assumed to be a flimsy material, cotton is actually stronger when wet as it can absorb 20x times its weight in water.

Placing texts and graphic designs on t-shirts was not popularized until the late 1930s when the movie “The Wizard Of Oz” showed workers fixing the Scarecrow were wearing green shirts with the word ‘Oz’. And as a way to promote the movie to the masses, the producers used white t-shirts and printed the title of the film on it. 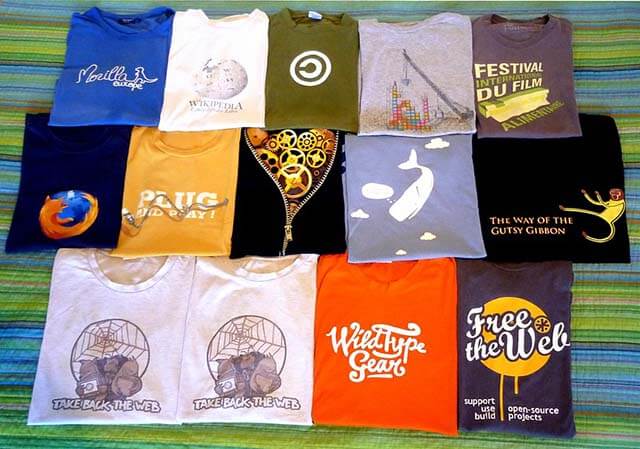 The Rise Of Icons And Slogan Tees

In the 1950s, Tropix Togs revolutionized the t-shirt industry by decorating plain shirts with iconic pop culture designs and slogans. Soon, the fashion world quickly caught up with the trend and paved the way for t-shirt customization. And this process of printing pop culture elements and business branding is still practiced by most t-shirt manufacturers to this day.

Thank God For Rock And Roll

Bands in the 1960s further popularized the wearing of graphic t-shirts by printing their logos and music through customized screen printed tees. And thanks to these Rock and Roll legends, band shirts became an integral part of street and counterculture fashion as most of us are still wearing this type of clothing today.

Making The Ordinary Into A Luxury Item

Finally, graphic t-shirts in today’s society are more than just of casual wear as they are now manufactured by top luxury brands like Chanel, Armani, D&G, Versace, Guess, Prada and a lot more. And wearing t-shirt designs from these brands are so popular these days because it creates a sense of sophisticated appeal and a unique of expressing one’s style.

If you’re looking for a place to buy high-quality graphic outfits online, check out TriggerMouth’s graphic shirt collection. Just click on the link to visit their site.