Being a professional firefighter is a dangerous job as they are required to deal with life-threatening situations while trying to save the lives and properties of others. And because they are exposed to fire and heat during operations, they have to wear protective clothing to protect their bodies from these harmful elements. Hence, firefighter clothing is a mandatory apparel to prevent injuries.

But what types of fabrics are used in a firefighter uniform? And how come these fabrics are so effective in preventing fire and heat from burning the wearer?

Get to know more about this as we tackle this topic in today’s article.

What Do Firefighters Wear? 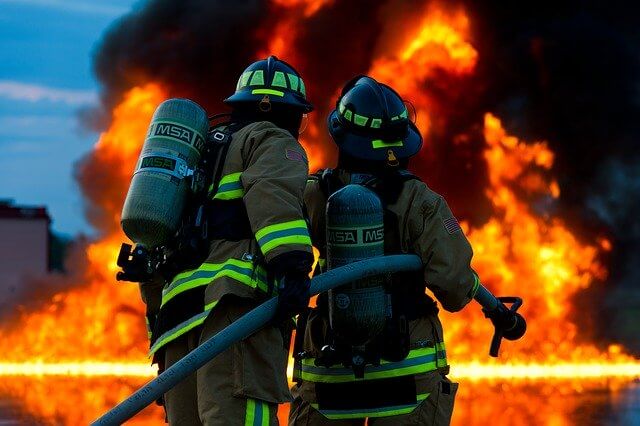 Most of us may not know this, but a firefighter’s apparel is officially called a “Bunker Gear”, fire kit, incident gear, or turnout gear. And these terms may refer to the individual gear used (boots, trousers, jacket, etc.) or a combination of the entire personal protective equipment (PPE).

The suit is usually made of a 3-ply fabric. To be specific, the outer layer is made of a fire-retardant material such as aramid fiber, a combination of aramid and novoloid fibers, and fire-resistant cotton. And these fabrics usually become brittle when coming into contact with direct fire for 10 seconds, with the exception of aramid and novoloid fibers as they are less brittle when exposed to such conditions.

On the other hand, the second layer is made of a specialized material that can repel vapor to protect the wearer from harmful smoke and chemical fumes during the firefighting operation. Although, the middle is proven effective against fumes, there are also reports of the wearer getting sick due to excessive sweating and heat inside the suit. So for that reason, the firefighter uniform in Europe is usually made without this vapor barrier. Aside from that, the middle layer also helps regulate the temperature inside the suit to prevent the wearer from succumbing to the extreme external temperatures and experiencing heat exhaustion.

The typical appearance of the outer ply is usually composed of wooly serge that is finely woven to become a dense fabric. And as for the middle layer, it is much coarser and composed of brushed wool to effectively resist heat.

And lastly, the third layer of the bunker gear serves as lining of the suit which is often made from lightweight cotton fabric.

Some firefighter suits are made of Kelvar or a fabric called Nomex. Both of these fabrics are highly resistant to fire which can protect the wearer from being on fire or getting burn when coming into contact with very hot surfaces. In some instances, the Nomex and Kevlar are combined to create a type of clothing that is highly durable and flame-retardant.

Finally, another reason why Nomex became a popular fabric of choice for a firefighter uniform is because it insulates the entire suit against electric charge. And therefore, it also prevents the wearer from getting electrocuted when putting off flame inside a fire-damaged house or building as high voltage wire are usually exposed in these types of situations.