Customarily, Hindus display Diwali decorations not only to follow tradition but also to make their homes stand out in light of the celebration. They even make Marigold garlands as an offering to Hindu gods and goddesses as a sign of trust and surrender, and auspiciousness of the festival.

Find out more about the significant meaning of the meaning of Diwali festival in Hindu culture in today’s blog entry.

Historically speaking, the celebration of Diwali can be traced back in ancient times. And while it’s being attributed as a harvest festival, there are also several legends pertaining how it all started:

One legend states that Diwali is a commemoration of Lord Vishnu and Lakshmi’s (goddess of wealth) wedding while others believe that it was actually a celebration of Lakshmi’s day of birth as she was supposedly born at the day of Kartik.

On the other hand, another version of the legend from the Bengals says that Diwali is a dedication to the worship of Lord Ganesha, Mother Kali. Moreover, Diwali is also considered as the commemoration of Rama’s return from his 14-year exile after defeating Ravana by lighting diyas (oil lamps) and firecrackers.

Why Is There Gambling During Diwali?

The tradition of gambling or also known as Dhanetras is also a prevalent practice during Diwali as it was thought that Shiva and Privati played dice on this day. And according to legend, she decreed that whoever gambles at the evening of Diwali will live prosperously the following year.

What The Lights And Firecrackers Mean To This Festival?

There are different explanations as to why lights and firecrackers are used during Diwali. According to some, the ritual of lighting diyas and firecrackers is an expression of thanksgiving to the heavens for providing good health, material wealth, peace, knowledge, and prosperity.

In a spiritual sense, the cracking sound of firecrackers is signal to the gods that the people on earth are happy because of their plentiful state.

And in a scientific sense, the fumes of firecrackers repel mosquitoes and other insects that are known to proliferate after the rainy season.

And What About The Spiritual Significance Of Diwali? 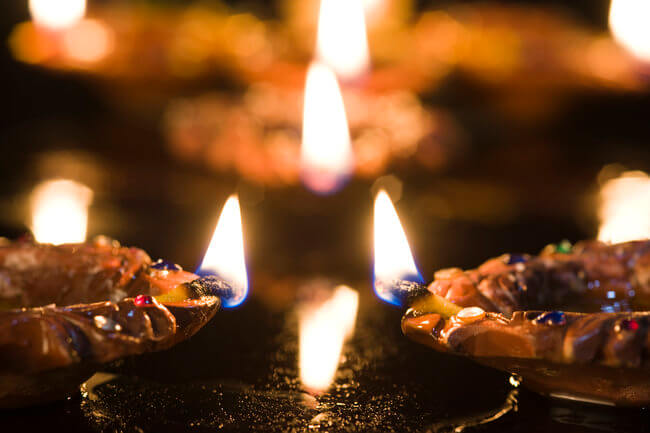 Beyond all the revelries, Diwali is also considered as an ideal time to reflect on your life and how to make changes to improve yourself. And with that being said, here are the different customs that Hindus hold dear during the celebration of Diwali:

The Diwali festival may be an important festival for Hindus, but it’s also being celebrated in many countries outside of India. So if you’re away from the merriment. All you need to do is close your eyes, meditate, and let the supreme light illuminate your soul.